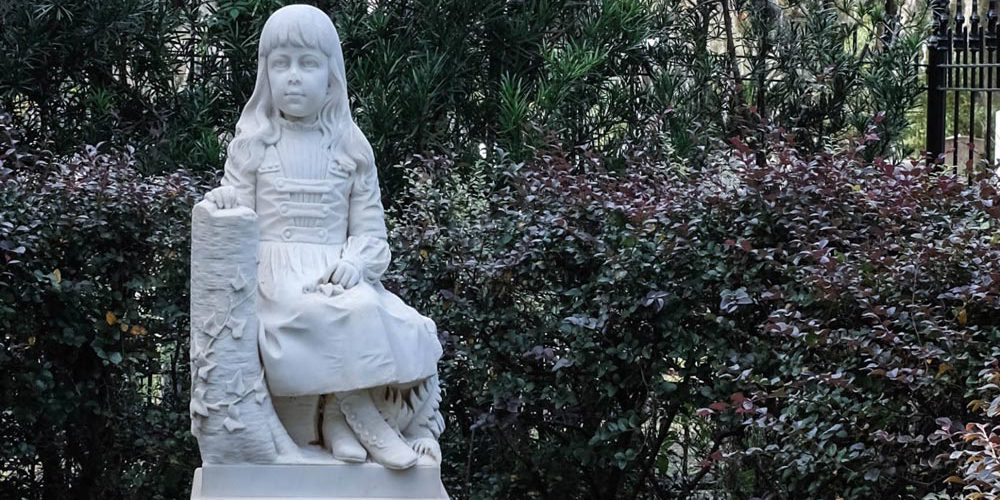 It’s hard to believe a six-year-old girl, especially one that is now over 125 years old, can create so much interest, research, a bit of controversy and some frustration so easily for so long a time.

But that’s Our Gracie – Gracie Watson, interred behind the wrought iron fence at E-98. Our tour guides give the basics Gracie was the daughter of a hotel manager, popular with everyone in downtown Savannah because she had run of the hotel (a Victorian version of the famous Eloise of the Plaza Hotel in New York City). She died of pneumonia two days before Easter when she was six years old, and her monument is based on a photograph given to a new sculptor in town named John Walz.

But as the popular radio newscaster of the mid-20th century was known to say:  And now for the rest of the story.

Gracie became more popular in death than she was alive, as her legend grew over time.

At some point after her death, it became popular to leave presents for Gracie at her gravesite, especially around Christmas.  One visitor told one of our hosts that he remembered meeting up with other 13-year-olds at one of the five-and-dime stores downtown, each spending a quarter on a gift, and then bicycling the three miles to Bonaventure to leave presents at the gravesite.

And presents are still left for her at the gate to her site today.

Before the Historical Society could have the fence around her grave installed, Gracie underwent a bit of stone-based surgery on her nose, which had  suffered damage because a) the tip was broken off by a stone thrown at the monument, b) the tip was damaged by frequent rubbing by students who thought the action would help them get better grades or c) the tip was exposed to the elements and eventually sugared (deteriorated) and was eroded off.

In either event, the nose was rebuilt before the fence went up.

Gracie not only attracts visitors to Bonaventure, but also helps our Society through the sales of souvenir post cards of her image.  The Society has produced several postcards with a variety of images of Gracie and, more recently, Felix Maher, DDS, photographed and produced a card in memory of a previous chair of the Society, Stacy Doty, for sale in the visitors center.

And she has brought out the best in some of our visitors.  One, in particular, Ms. Melanie Beal Marks of CT House Histories, a genealogist from Connecticut, came to Bonaventure to do research on a particular site.  When she asked where the site was, she was told “Behind our Little Gracie.” Ms. Marks pursued to the point and learned where Gracie was and the basic story accompanying the site.  In return for the assistance in her original search, Ms. Marks researched and prepared a binder which, for the first time, documented the family lineages of Gracie’s mother and father and provided certified information about their deaths and burials. That binder is now the property of the Department of Cemeteries but accessible to BHS for research.

How to learn more about Bonaventure

Additional information on how you can help with our preservation efforts or join our fair society can be found on our website listed below. You can also find information regarding tours and other topics at our site or across our social media presence. So give us a follow!

Bonaventure Cemetery is nearly sold out!  And Tourism is increasing!
April 7, 2017